MightyText is by far one of my favorite services/apps.  This service allows me to send and receive texts on my PC.   The functionality comes in great when I want to stay at my full PC keyboard, rather than physically picking up my cellphone.

The service installs an App on your smartphone(Android for now) . Then you install an app in the browser(Chrome, Firefox, IE and Safari), and boom !  Your set !

I have used this for tech support and archival purposes. Yes I now have a way of keeping my old text messages !

Upcoming Workshop.  Be sure to sign up and learn about the Cloud !! 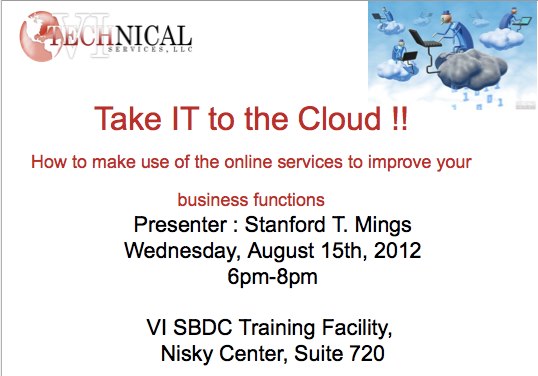 Great article from PC Adviser in the UK, that speaks to me as I view myself as a “Technology Swiss Army Knife”.

The nation’s employment outlook for IT professionals has suddenly surged, gaining 18,200 jobs, the largest monthly increase since 2008, according to tech employment-research firm Foote Partners.

In July, 4,900 new IT jobs were added in two job segments, telecommunications, and separately “data processing, hosting and related services,” Foote Partners said today. Also added were 13,300 other jobs in sectors called “management and technical consulting services” and “computer systems design/related services.” The firm says these last two categories, with a combined total of 242,000 jobs added in the past 24 months, have seen solid growth even in the midst of the nation’s general economic malaise.

“The overall employment situation in the U.S. is lackluster, in fact this is the fifth consecutive month of subpar results,” says David Foote, CEO at Foote Partners, which has been tracking IT labor trends since 1997. Today’s findings are based on Foote’s analysis of the July 2012 U.S. employment numbers from the Department of Labor’s Bureau of Labor Statistics. “But the fact that more than 18,000 new jobs were created last month for people with significant IT skills and experience and nearly 57,000 new jobs added in the past three months is incredibly good news.”

While his remarks were upbeat, Foote also adds that not all IT workers are equally benefiting from the jobs expansion. “Many companies are looking for superstars and workers we refer to as ‘walking Swiss Army knives’ those with the right mix of technology, business and people skills to handle some very tough jobs.” Foote says trends that matter include adoption of cloud computing, mobile platforms, and Big Data analytics, among other technologies

Today marks another milestone in my life as a Technologist.  I was asked at the last minute to testify in the Virgin Islands Superior Court on an Internet matter involving domain ownership.  I was sworn in and qualified as Expert witness in Information Technology and Web Technologies.  It’s official !  I am an Expert in the eyes of the Law !!!

I was assured that I did a good job and now can put that under my belt.

Let’s see what doors this opens.

Be sure to visit eWaste.VI and sign up on the mailing list to get updates/tips on how to handle Electronic Waste in the US Virgin Islands